The gods of small things have shone on us this week. Our house is at the “touch me and I’ll break, I swear I will” stage, so everything’s held together by stick and cardboard. And in the case of Ikea, that’s quite good, really. My step daughter lost her room after my daughter moved up north, so we needed to get a space built for her, pronto. I think she actually trained us very well to get this done in a hurry: she uncomplainingly insisted she could manage on one of our camp beds for a while. But the camp beds are so small one’s feet hang over the edge and over the course of about 6 weeks she started to look so haggard I finally insisted she have her mattress on the floor, which she dutifully did. The next weekend her room went in.

Thanks to Dylan McPherson of McPherson Constructions here in Brisbane and all his worker bees, they did a great job at a very reasonable rate, too. We’ll choose them again!

Now, her room is a tad teensy weensy, so she chose what I would call a monstrosity of a bunk bed. It has all its storage underneath the bed itself and it’s a hulking great thing that dwarfs her tiny room. We painted her room vivid white, but didn’t realise we’d need to fill all the vj joists with filler (the old colour was a dark grey which hides all the shadows), so it looks a wee bit patchy. Still, it’s already much better for her and she’s much happier now she’s off the floor and into her own space.

We’ve begun decorating it in the colours she likes of pink, purple and turquoise. It’s looking bright and cheerful, even if it missing a bit of chair comfort – sadly, there’s nowhere to put a comfy chair. 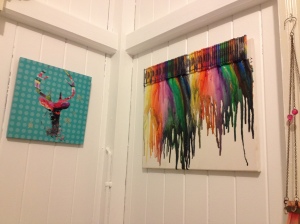 She’s very into crisp, clean, modern styles, which I hate, but even I have to admit her room is looking very sharp and fresh. The colours are great, too.

The other thing that’s been happening of late is that our plumbing is starting to go. Not in a “OMG the toilet’s blocked up and it’s a holiday weekend”  kind of way, more in a “hmm, we seem to be losing pressure in our shower and all our taps are falling off and there’s a blocked drain” kind of way. So last week we got the plumber out and he fixed it all up for us, even gave us a new front tap for the front yard as the old one was all blocked with rust. He repaired all the taps and fixed the shower pressure (who knew water limiters could fail so spectacularly after only 2 years?) and then he tackled the blocked drain. It’s a grey water drain that’s supposed to go into the sewer line but it wasn’t working. So he blasted it with high pressure water and discovered…it goes nowhere. The pipe doesn’t exist. There is no drain. Our grey water from the shower seeps into the ground. Ew. Anyway, it will all need replacing soonish because there was also a leak because all the galvanised pipes are kaput -held together literally with plumber’s tape. Hmm. But he fixed what he could, nice, kind plumber George.

But! You know something, we can live with it for another 6 months or so because I think DH is getting to the point of no return. We’ve started obsessively looking at houses again. We saw a couple of beauties today, and in particular this one:

DH wants a haven to come home to: a place where he can prop his feet up on the back deck and suck down a beer. Which is something he’s NEVER done, but hey! More importantly, he wants a sanctuary. Which we currently don’t have because our house is on a busy road and we have no back deck.

We also have a terrible bathroom and our west wing is appalling and our house is hot and has no insulation and our electricity is about to go and, and, and…

Oh my. A big decision indeed. DH and I are trying to decide whether to stay put at Chez Harry’s and fully renovate the old dear or whether to pull up stumps and move back a couple of streets to a quieter locale with a fully renovated house for a couple of $$ more. That would a couple of hundred THOUSAND more.

You see, it’s like this. We now have my adult daughter (formerly a he) living with us as she goes through her transition. She is unlikely to leave for a couple of years given her mental health issues and various needs. Cool. We also have 2 younger children who need their own spaces during the times they stay with us – they might also want to live with us in future while they are studying.  Also cool. Then, there might be grandchildren. And happy families visiting. I think we’ve got about 15 years where we will need to have a larger house for extended family, maybe longer.

The other thing is, our income has grown rather nicely in this time. So much so that we could actually afford to move back a few streets. We could also renovate. Given what we’ve seen around, the chance of doing either is pretty high. Unfortunately, we are on a busy street and the cost to renovate our home may not match the eventual value. Something about borrowing and liability and potential recouping of value etc etc. At one point I spoke to the bank and while they were happy to lend money for some small projects they weren’t quite as happy to extend a decent renovation budget to do all the things needed to bring the house up to date.

I’ve provided a pretty picture of our house plans for your edification with the West Wing showing sunroom, robe (Hah!) and bathroom and the front of the house showing the office and master bedroom. East Wing currently has a porch on it and the back of the house has the current toilet, bed 1, kitchen and dining rooms. 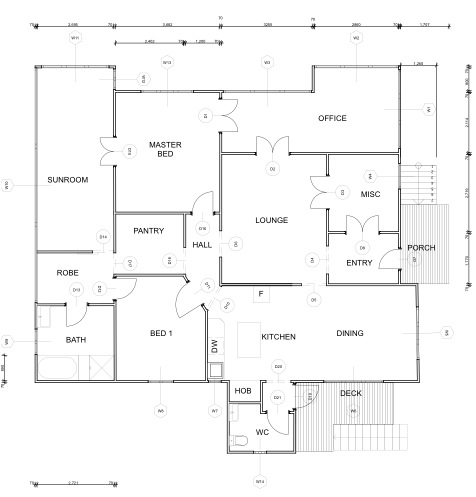 1. FRONT of house, and whole exterior

You see? There’s a LOT to consider. If we don’t go downstairs or add a poolroom we could probably do most of this, but even with the simplest jobs we need to replace all the electrics and pipes, as they are all on the fritz.

So, I guesstimate the front sections additions, relining, painting and West Wing revamp to cost about $70000 (that’s $1500 per square metre) which could easily be accommodated by the bank. It’s the back section that becomes interesting. And expensive. But now’s the time to think about it, because our plumbing is failing, our kitchen appliances are all dying simultaneously, and we have nowhere nice to sit of an evening (ie family room/back deck). And our garden is a den of weeds.

Do we stay or do we go? I love Harry’s place. But it’s groaning and sighing and telling us it needs some TLC and a pot of money thrown at it.