In academia everything seems to move super slowly. This becomes the normal. By contrast, the building works here seem to be going at a lightning rate. Yesterday the plumber was in roughing in all the pipes, and today the electricians are roughing in all the lines. Some things we’ve waited years to fix are being done today, including the light fitting in the dining room and replacing a switch that wouldn’t allow our kitchen light to be switched off. It’s only 9.00am. We’ve already been invoiced for a progress payment, but when I saw what has been done this week I’m not surprised!

It’s good to be on site here making sure dumb things don’t happen. Like where the outlets by the bed go. We’ve had the bed jammed into the corner to allow easier access for the guys to get their stuff through, so the electrician assumed that’s where we’d have the outlets. Der. No. Ask. Luckily I caught them in time to fix THAT potential problem, and the switches were moved over slightly. This sort of stuff is not terribly important because we won’t see the outlets anyway, but I don’t want to be fighting with the stuff under the bed to plug my phone in.

Another thing is people assume where lights go etc. For a short arsed person like me who wants lights on either side of the vanity mirror, the globes need to be basically in the middle of my head, not above. So I had to be quite strict on the placement – not ABOVE the mirror, BESIDE the mirror. Women know this. Men don’t. As I said, I don’t care about hubby: he doesn’t wear makeup. Besides, he’s not that tall that the lights are going to give him a sallow up-glow.

Also, because we can’t afford to put lights in the WIR sections (have a look at any decent renovation show and they are all lit from within, I kid you not, this is a thing), we’re having 3 LED down lights in the little room, to correspond to each section. This will ensure we can actually see everything. The guy seems to think this will make the room very bright. Says I, YES. Mostly they won’t be needed, but at night when we are changing to go out to yet another bloody function I need to be able to see my clothes. So I’d rather more than less lights please. Besides, I’m blind.

The photos you see are of the room being framed up into an ensuite and WIR. The builders have been here for 3 days and the plumber is here now roughing up the pipes for the mixer and the other stuff. The work is noisy and what with all the other building works going on in the street I’m hoping we have no shift workers living nearby. It’s a bun fight out there competing with the sound of band saws and hammers.

Sadly the ensuite is the only room in the house that has a stunning view of the city and so we decided we needed to be able to see it. DH and I demanded an enormous picture window in the ensuite: it’s so long, low and wide it may show the boobies when I shower, but it’s a pretty private space from the street (you’d need a pretty powerful telescope to look in). I’m assuming the whole window will slot into the frame they’ve mocked up for it and the tiled ledge will provide useful storage for strategically placed shampoo bottles. Stuff privacy. If people want to go to the trouble of looking at an old woman’s saggy boobies when she’s showering then I say go for it! (So did my builder, laughing.) Eventually we’ll put an outside awning in to protect the room from the fairly torrid Western sun, which will solve the privacy issue.

and then we’re putting in VJs thereafter, including the ceiling. As I said to Dylan from McPherson Constructions, there is no plasterboard anywhere in our house. Why start now? Also, we’ve decided to keep the interesting higgledy-piggledy shaped roof in the bathroom because I want to recognise the origins of the house and its oddness. The front gable was attached in a really weird way with lots of angles, so the bathroom ceiling will pay homage to these where possible.

We’ve just ordered the WIR and bathroom vanity. The vanity is a bespoke piece in a clean shaker style with a large porcelain bowl laid on a satin blackbutt top, with four legs and an open shelf for towels underneath. It should look beautiful and I’ve had fun deciding on the shaker doors, the height of the drawers, even which side the centre door is opened! As to the WIR, I’ve had SO much fun deciding which section is going to be full height, which double. I’ve planned a centre console for my jewellery and makeup booth (I’ve talked to the builder about putting a mirror in the back of it and LED lighting in the top). I’ve even got some serious shoe storage happening.

I’ve ordered and paid for all the tapware, which should arrive soon. It ended up being cheaper than I thought because once I lost my desire for enamel handles I found a cheap and cheerful substitute at Reece that looks EXACTLY the same. By that I mean less than 1/3 the price of the original. I went to a Reece store yesterday and found exactly what I was looking for. No need for substitute items! Dorf Luxton (now discontinued) is a good Australian brand for our slightly old-style towel rails and toilet roll holder; Posh Bristol is the brand and make of the sink taps. Porcher Cygnet is the name of our old-style shower with diverter for my own shower preferences. Posh Dominique is the back-to-wall close-coupled toilet, and there’s a couple of other things including shower mixer and vanity bowl. Amazing how impossible it is to find a brand that incorporates all my favourite looks and designs in one make. I also ordered and paid for these beautiful lights which will sit on either side of the mirror (design yet to be decided but I’m weirdly tempted by a rectangular mirror with a narrow soft brass frame or an oval black-framed mirror). They’re ridiculously old fashioned but there’s little in the bathroom that is, and it’s about the only piece of bling in there aside from the vanity taps. Because the glass shade is a regular size we can always buy different ones down the track for a change in appearance. I’ll finish off the room with a well-placed orchid (I have one that is flowering nicely), brand new towels and perhaps a crystal container or soap dish. Can’t hardly wait. 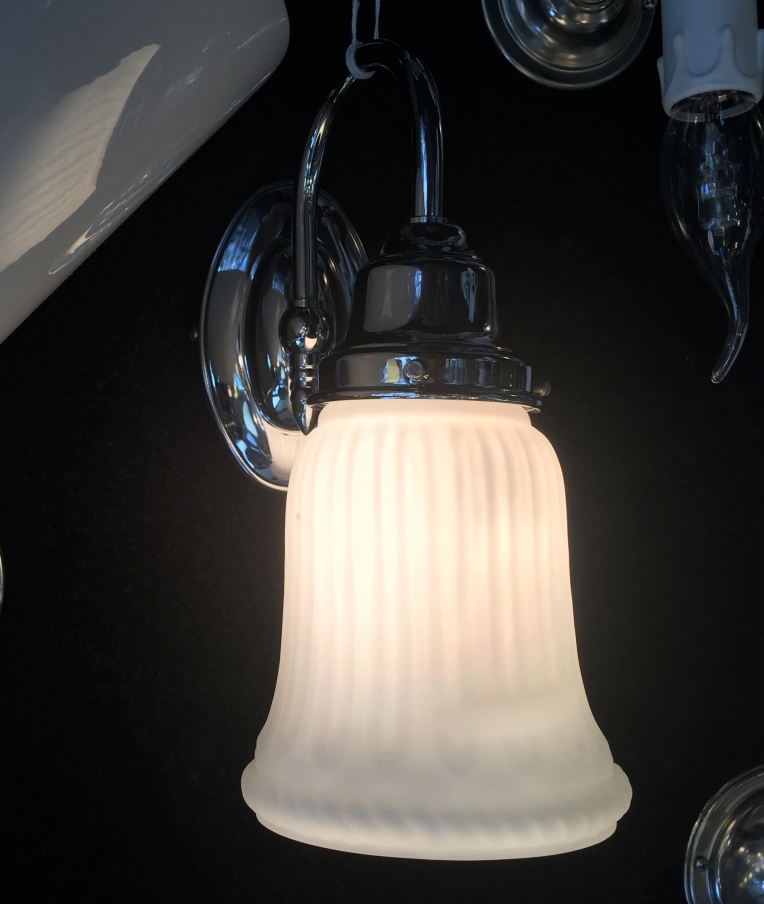 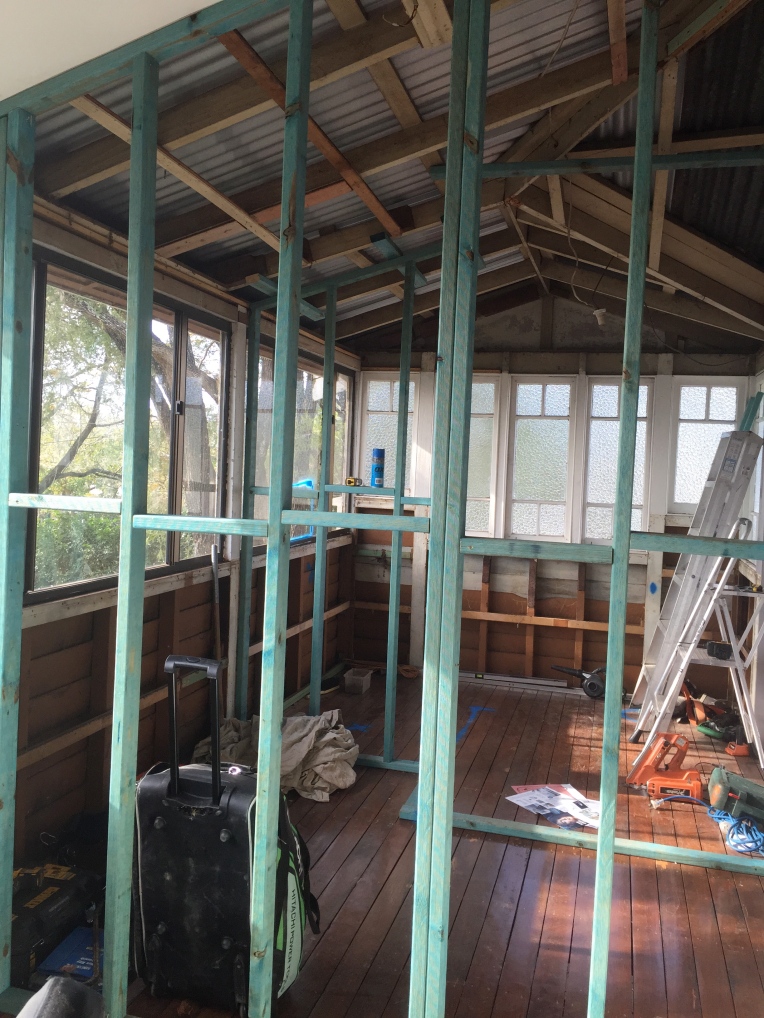 Yes, you heard it here – the building has commenced! Well, not quite the building part exactly, more the cheap and cheerful renovation part. Dylan from McPherson Constructions is here ready to go with his worker John, the bin guy arrived at 6.30am waking me in fright, and we have cleared the West wing in preparation for the big rip-out.

There are photos of the preamble. It looks neat, tidy, and lovely. SO NICE FOR IT TO BE CLEAN AND WITHOUT FURNITURE. I say this in capital letters because I’m such a collector of things that we easily become overwhelmed with stuff. Stuff, it must be said, that is needed. This is what living without storage solutions does to one. Collections of stand-alone furniture that really just add visual clutter. Note to self: do I really need ALL the books?

Very soon this serene space will look ugly, dusty and overwhelming. And the beautiful polished hardwood floors will be hidden forever under cement sheeting and tiles. Very sad. But awesome!

(On a side note, my builder sings. Not that well, but cheerfully. And he whistles. This is a GOOD DAY.)